In any discipline, there are always few words that might sound scary.  In small animal reproduction? Well, canine brucellosis is definitely one of these… When I was working at the vet faculty, I wanted all our vet students to be aware of this disease: when they will be in practice, they will know when to suspect it. Back then I was in France, where the disease has rarely been reported. Now I’m in North America, where the disease is supposed to be endemic (I read a reports few years ago stating that “1-10% of american kennels might be infected”). When I arrived here, I obviously spoke with my local colleagues: reports are good but you definitely want the opinion of someone in the field. It does not seem to be that frequent in Canada, and for a long time it was mainly reported in the southern part of the US. But then, in 2005, came Hurricane Katrina: several dogs from the Southern States were relocated in the North of the country. Some of them brought canine brucellosis with them, and we now hear of cases in Pennsylvania, Ohio, Indiana, Missouri, Iowa, Minnesota, New York, Colorado, Michigan… Canine brucellosis is definitely out there, and our canine breeders are at risk. Here are key points I judge important for you to know, in order to better prevent this disease.

1/ Canine brucellosis is NOT ONLY a sexually transmitted disease. For sure Brucella canis can be found in the semen and the genital secretions of the infected individuals. But it can also be found in the saliva, the urine, the feces,… Ingestion, inhalation (in fact any mucosal contact) of enough contaminated material can also lead to infection. Transplacental infection occurs as well, so infected bitches might give birth to infected puppies.

2/ Brucella canis does not remain for long in the outside environment, typically the main route of transmission is by direct contact with an infected individual. However in adequate conditions (=a kennel environment for instance), they can survive up to 2 months if protected in organic matter (like feces or soil). Appropriate cleaning and disinfecting measures are essential: disinfectants usually used in kennels (quaternary ammoniums, bleach, etc) will be highly effective.

3/ In breeding units, abortions after 45 days of pregnancy (sometimes with puppies of different size) and neonatal mortality are commonly reported but ANY clinical sign of the genital tract of both males and females can be related to canine brucellosis. In the bitch, it can be abnormal vulvar discharge, chronic vaginitis, infertility, while in the male you could deal with bad semen quality (low sperm count or no sperm at all, increased abnormal forms percentage, decreased motility,…), persistent inflammation of the scrotum, testes, penis and penile sheet. Isolate any suspect individual until your veterinarian ruled out canine brucellosis.

4/ For sure you need to test any individual exhibiting evocative clinical signs. But most importantly, you should also test all your new breeding individuals to be sure the disease won’t get into your kennel. Blood test detecting antibodies against Brucella canis are available and quite effective (the animal will produce antibodies following infection, but this will not be enough in most of the cases to eliminate the disease), all new individuals should be tested prior to enter the kennel. Antibody production following infection takes 3-4 weeks so a second test should be performed one month after the first negative result to confirm the negativity. 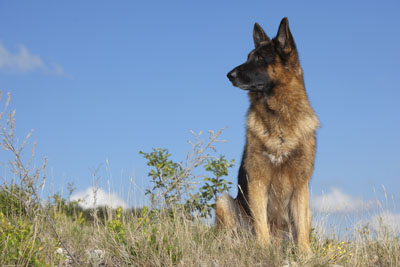 5/ Breeding animals should be tested once or twice a year to confirm their negative status. Artificial insemination can be a way to decrease the risk of transmission, but keep in mind that it only protects the male, if the semen is contaminated, the female might get the disease. Even in this case, remember that brucellosis can be transmitted by ingestion: if the male licks the genital secretions of an infected female – like they might do during semen collection- this animal might get infected as well! If you are going to use an outside male or if your male is going to do a natural mating with a female that does not belong to your kennel, here also ask for a test 3-5 weeks prior. Same thing goes if you are using chilled semen!

6/ The test is positive? First thing: don’t panic!  False positive are not uncommon, because other non pathogenic bacterias (Bordetellla sp, Moraxella sp, etc.) can cross-react. In case of a positive result a second test must be performed at least a month later to confirm the individual’s status. Because of this cross-reaction with Bordetellla bacterias, one can wonder if kennel cough vaccines can lead to false positive results. Good news, studies were conducted on this topic and showed that the vaccinal statuts against kennel cough does not interfere with the test.

7/ Can we treat canine brucellosis? Unfortunately not: bacterias might persist for years in lymph nodes. Infected individuals should be spayed/neutered and a lifetime specific antibiotherapy might be prescribed. They must be removed from the breeding program.

8/ Brucella canis is potentially zoonotic. For sure, its zoonotic power is not extremely high but breeders are at risk! Never manipulate material that could be contaminated (like abortion material, placentas or dead puppies) without wearing gloves. Wash your hands thoroughly several times a day after manipulating your animals. Infected individuals can be placed in foster homes but not with immune-compromised persons (like HIV-infected persons).

Unfortunately the freezing process will not destroy the brucellas and bitches can be infected when contaminated frozen semen is used. That's why many countries are asking that a brucella test (typically a serology) is performed at the time the semen is frozen. In France for instance, frozen semen that is sent without this certificate will not be allow to go through customs and they are very strict about it, this is the case in many other countries as well. That's why when freezing, we always propose to do this test at the time of the semen collection.

Can it be transmitted in frozen semen or does the freezing destroy it?